The Underrated Art of Ballet Folklorico 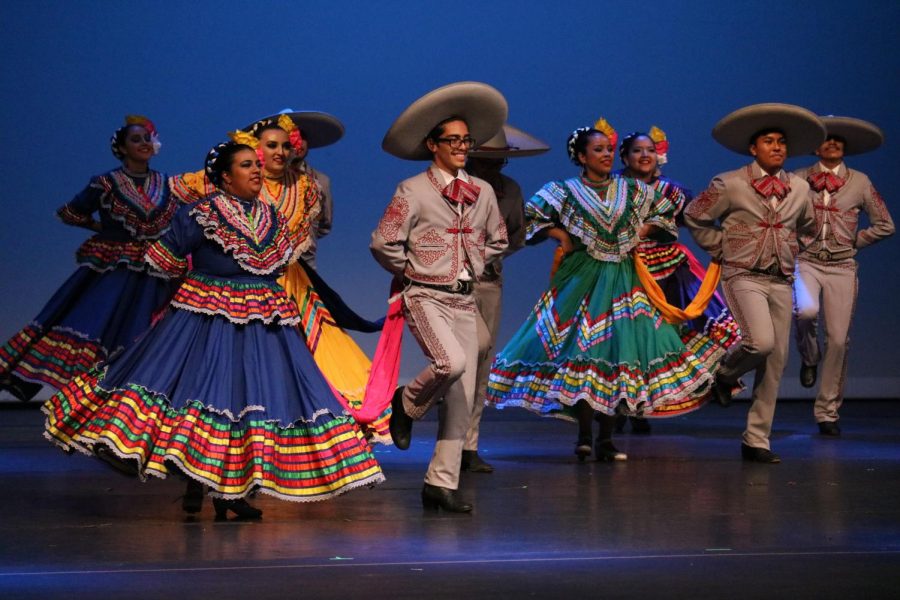 Rhythmic stomping, ear piercing yelps and most importantly beautiful and vibrant dresses that swish all around the stage. These are all the characteristics that come to mind when thinking of Baile Folklorico. It is a traditional Mexican dance which is celebrated constantly through their fiestas and celebrations. Today, there are Baile Folklorico  dance teams all over the southern parts of America, especially Texas. Even our school has an Baile Folklorico team, although not much is known about them from the student body.

“Originally I was doing art, but I didn’t enjoy it. I kinda wanted to do something more fun where I could meet more people,” sophomore Jaquelin Sloiz said, “Then my friend told me about Baile Folklorico and whenever she talked about it she seemed very excited and absolutely loved it. Then I wanted to join it and changed my schedule for it.”

Despite belief to the contrary, anyone can join Baile Folklorico. It is technically a PE credit, so it is always an option for students of any background.

“I think there is a stereotype that says that you have to be hispanic or Mexican to be in Baile Folklorico,” Senior and Co-captain Esmeralda Jimenez said, “But no, we have a lot of people who are not from the native culture.”

Baile Folklorico has different level classes much like the other dance units. However, beginners and intermediate classes are students taught by the captains and presidents of the senior classes.

“The way I like to teach my class is I look up videos of dances from the region we are given and learn the steps to then teach to the rest of the class,” Jimenez said, “Our teacher has been dancing for a long time, so he sometimes uses dances he has danced in the past. He also goes to work shops and sometimes makes stuff off of that.”

The different leveled classes all work during school hours, but the varsity dance team also practices after school for up to three hours once a twice a week.

“Practices are usually light and upbeat and we have a lot of fun, but we do have days where we are very serious about dancing,” Junior Lucas Ochoa said.

The team dances almost every weekend in competitions for our school. They travel all over Texas to compete against other school’s Baile Folklorico dance teams and even some out of state.

“Competitions are crazy. We actually hosted one, but it got too big, so it was moved to Round Rock high school. It is very chaotic, but that fun type of chaotic,” Senior and President Anne Marie Jardine said, “We win a lot of them. Just recently at Macalem, we won best overall and the trophy is as tall as my shoulder.”

Although they win quite often, Baile Folklorico isn’t mentioned often among the student body. They aren’t even mentioned in the afternoon announcements. The only times Baile Folklorico has been shown during school hours is during Hispanic Heritage Month and sometimes pep rallies.

“Hispanics are one of the biggest demographics in the school and I think it’s important for others to know that they can still have part of their culture,” Jardine said, “ One of my friends moved up from Mexico and she said this is the first place she has felt welcomed in America. I feel it’s important to show students from other hispanic countries that they can keep and celebrate their culture.”

Baile Folklorico and Hispanic culture should be recognised and represented in our school more often than a few days of a semester. Jimenez believes that it is the team’s fault for not showcasing themselves enough of what they do outside of school.

“We had a performance on October 5th and  didn’t really say anything about it. We need to show more of what we are doing. I feel like people should know more about it because we work hard with after school practices and competitions being next semester we are going to be performing a lot.”

Others believe that it is the falcultie’s responsibility to showcase and acknowledge a successful part of their school. Suggestions of how to improve the popularity of Baile Folklorico includes putting up banners, making regular announcements of their accomplishments and even considering them as a sport.

“It is usually recognised as a fine art, but it’s also a PE credit, so we should be seen as more of a sport than anything,” Junior Christal Garza said, “I just want us to be more recognised and perform here more.”

The Baile Folklorico is investing and fun for anyone who is interested in hispanic culture and dancing. Even if you can’t change classes to join, they still have an after school program every Monday for students. Email the Baile Folklorico teacher, Jose Limon, for more details.

“We are pretty much a big family! We are all in different grades and classes but we still find a way to communicate. We all just love dancing and bond over it,” Garza said.